For a large chemicals company in Switzerland, the task was to develop an optimized temperature control concept in the temperature range from 50 to 360 °C for controlling the temperatures of various reactors and catalyzers. Electrical heating was excluded on the grounds of the required 3.0 Megawatt heating capacity and the resulting high cost of electricity. The specialists of LAUDA Heating and cooling systems therefore decided to use two gas-fired, thermal oil heaters, with a power of 1.5 Megawatt each, as the central heating system.

LAUDA acted as general contractor for the complete temperature control system. This also included the manufacture of the two gas heaters with double-flue chimney and heat recovery system. This made LAUDA directly responsible for the complete project management as well as for the welding supervision and quality assurance of all suppliers. Consequently, throughout the whole project period, the Swiss chemicals company had just one, central point of contact. An important prerequisite for continuously smooth communication and successful project completion.

For the open-air installation and for cooling, air coolers with a capacity of around 250 kilowatt proved to be optimal, since the thermal oil must be cooled from 350 to 50 °C. This meant we could do without a complex water cooling system. This decision led to another advantage: the risk of the cooling water freezing in winter was eliminated. As usual, before delivery, LAUDA carried out a complete Factory Acceptance Test (FAT) of all plant components with thermal oil in their main factory, Lauda-Königshofen, in the presence of the customer. Commissioning in Switzerland was carried out by staff of the LAUDA Service Center in close collaboration with the LAUDA suppliers.

Perfect teamwork: For a chemicals company in Switzerland, the temperature control specialist, LAUDA, developed and realized a complete concept for controlling the temperatures of reactors and catalyzers over the temperature range from 50 to 360 °C. 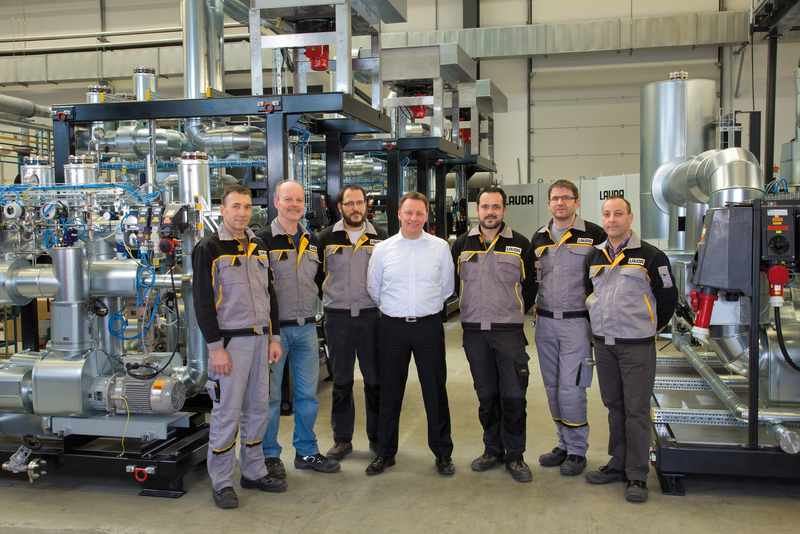 Thurne and Bioengineering stay strong together

Compact and versatile gas scrubber made of glass

We use cookies on our website to give you the most relevant experience by remembering your preferences and repeat visits. By clicking “Accept All”, you consent to the use of ALL the cookies. However, you may visit "Cookie Settings" to provide a controlled consent.
Cookie SettingsAccept All
Manage consent

This website uses cookies to improve your experience while you navigate through the website. Out of these, the cookies that are categorized as necessary are stored on your browser. As they are essential for the working of basic functionalities of the website. We also use third-party cookies that help us analyze and understand how you use this website. These cookies will be stored in your browser only with your consent. You also have the option to opt-out of these cookies. But opting out of some of these cookies may affect your browsing experience.
Necessary Always Enabled
Necessary cookies are absolutely essential for the website to function properly. These cookies ensure basic functionalities and security features of the website, anonymously.
Functional
Functional cookies help to perform certain functionalities like sharing the content of the website on social media platforms, collect feedbacks, and other third-party features.
Performance
Performance cookies are used to understand and analyze the key performance indexes of the website which helps in delivering a better user experience for the visitors.
Analytics
Analytical cookies are used to understand how visitors interact with the website. These cookies help provide information on metrics the number of visitors, bounce rate, traffic source, etc.
Advertisement
Advertisement cookies are used to provide visitors with relevant ads and marketing campaigns. These cookies track visitors across websites and collect information to provide customized ads.
Others
Other uncategorized cookies are those that are being analyzed and have not been classified into a category as yet.
SAVE & ACCEPT

Hit enter to search or ESC to close