Start up of a trading company for process equipment

Gösta Thurne founded Thurne Teknik AB in 1962. The company started as a sales agency for European manufacturers of processing equipment and bulk chemicals for the Swedish market. The first supplier in our portfolio was the company QVF. By 1967, some of today’s most important suppliers, such as De Dietrich and Sweco Europe, were already partnering with Thurne Teknik for outsourcing of marketing, sales and support.

In the 1970s, Thurne Teknik expanded its portfolio to also include markets such as the industries for pulp & paper, plastics, cables and rubber, but still active only in Sweden.

In 1988, Jan Ericsson became a member of the board, and in 1995, he bought the company from Gösta Thurne who retired. As a consequence of stronger focus, we decided in 1997 to stop all activities not related to the process industry. This focus later lead to the start-up of our bioprocess activities and the establishment of our Powder Processing group in early 2000. In the years between 1997 and 2000, all methods and tools were revised and the important in-house designed CRM system M2000 was implemented. A new 5-year-business plan was prepared in 2000 and is renewed each third year for the coming 5-year-period.

In line with the new vision of becoming a Nordic player, Thurne Teknik opened a branch office in Denmark in 2003, taking over staff from Carbone Lorraine Nordic. Ulf Stenerhag became the new managing director in 2006. In the same year, the branch office in Finland was established and in 2015 we opened our branch office for the Baltic region in Riga.

“A Sustainable Tomorrow” award for The Hunger Project and Thurne Teknik

One region One team!

Our core values are the cornerstones of the development of our company culture. 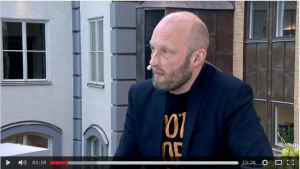